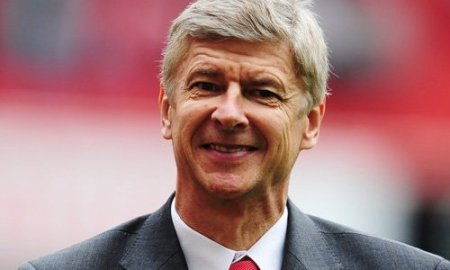 Despite the fact that we have won our game, there were some tense moments where we could have easily dropped points. The way we dealt with the high balls was not entirely convincing. We improved a bit with the inclusion of Djourou but still there needs to be work done.

When asked about this Wenger replied that there were times we looked vulnerable but he expected it. He said that when you are ending with five strikers you tend to suffer from corners. He also said that in the second half the team did better in dealing with the aerial balls.

“I agree with you that at some stage we looked a bit vulnerable in the air but don’t forget we finished the game with five strikers on the pitch, so I expected to suffer from corners. Overall I believe in the second half our defenders dealt well with the high ball.”

The match was difficult not just because of us failing to keep it tight at the back but also due to some good pressing play by Fulham. They took the game to us and tested our resolve. Wenger quickly acknowledged the fact that it was a good game as both teams played well.  Fulham were efficient in the middle as they put lots of pressure on our backline. He said that the combination of Gera and Kamara worked for them. To win today’s game resilience along with quality was required and the team delivered on that.

“It was a good game. Overall I think Fulham played well and we played well. They put us under pressure because Gera and Kamara combined well and their midfield was efficient, they played quite a direct game to expose us with balls behind our defenders. We needed not only quality but spirit and resilience today and we got it.” 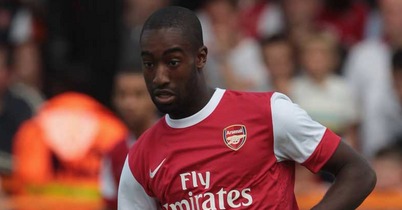 Djourou: 'He was dominant today'

Djourou made the difference in the second half with some good defending. He led our backline very well and helped the team deal with the long balls. Wenger praised him in his comments and said that he is improving with every game this season.  On his performance he said that he was dominant in the air when our team was under pressure. Wenger was delighted in turning him into a promising centre back from a midfield player.

“From the start of the season he has gone from strength to strength and today, in the difficult period when we had to defend in the air, he was dominant. He has not only shown dominance but also personality. That’s why I am very happy. He came here as a midfielder and we transformed him into a centre back.”

When asked about his regular starts, Wenger said that the players know that they will be rotated so that everyone has starts. As Djourou is coming back after a year, he needs rotation every few games even though he is doing very well. Arsene doesn’t want to lose him by playing him in three matches a week.

Another hard fought game and another three important points won. At the moment we are not making things easy for our selves as we are not convincing. Still the result is what matters and the outcome has taken us to the top of the League.

Overall the team showed good spirit but we need to work on our niggling defensive problems. Our full backs were exceptional today along with the keeper. The centre backs position was where the mistakes were occurring. It was quite visible that there was no communication among the players at the back and no one took charge of the situation. The midfielders also failed to make impact today. They did well in patches though. Upfront, Arshavin and Nasri made the difference today. Nasri was splendid and his individual brilliance got us the goals whereas Arshavin created the chances. Chamakh helped  a lot  but failed to take his own chances.

Fabianski: Made a brilliant saves near the end of both the halves. Not at fault for the goal and did well on most occasions. Made one bad judgment but thankfully we didn’t concede on that occasion. 7

Sagna: He was brilliant today again. Combined well with Nasri and at the back didn’t allow any penetration. Some of his crosses were also good. 7

Squillaci: After a good first few games, Squillaci really looks very nervous and shaky at the back. Was partially at fault for the goal. He does his job but at times he completely loses it.  He needs to be a leader at the back. He needs to communicate to bring calmness at the back. Some of his clearances were also not good today. 6

Koscielny: Was on for the time when we were dominating. Did his job, although, he too needs to communicate with the players around him. Hopefully his injury is not serious. 6

Clichy: Good performance by the Frenchman. He was early onto many balls and made some good interceptions. Defended really well under pressure and contributed going forward also. This is what we want from him in every game. 7.5

Song: Not a very influential game from Song. Committed a lot of mistakes and gave the ball on more than a few occasions. Lost quite a few battles in the middle too. 5.5

Wilshere: Also failed to make an impact today. The start was good by him but he switched off when Fulham started to press and put pressure on us. 6

Rosicky: Tried hard but couldn’t impose himself on the game. Dropped down deep to get the balls and helped in defending. Brought in players upfront into the game but at times made one pass to many. Needs to take his chances with shots on goal. 6.5

Nasri: Simply awesome! He was completely on a different level today. The way he took both his goals shows that he is intelligent, he has quality, he has skill, he has patience and above all he knows how to respond. Apart from that he also made some good runs and opened up spaces for others. He is by far our best and influential player this season. 9.5

Chamakh: He worked hard and helped the team in defence. He also held up the ball nicely but didn’t do the job that he should do as a striker i.e. to let loose a shot when through on goal. In the first half he passed the ball back and the chance was lost. In the second he was waiting for a teammate before shooting the ball over the bar after realizing no one was there. Needs to work on taking his chances. 6.5

Arshavin: Apart from not scoring goals, he had a great game in terms of creating chances. The first thirty minutes of the game he was on fire. Every chance that was created was through him and he himself took his shots. Went anonymous in few parts of the game though. He helped in the defence too and importantly got another assist. 8

Djourou: After a shaky start really did well at the back. Won almost all of his duels and aerially was dominant. Made some good interceptions and dealt with pressure nicely. Had one or two bad moments but covered up for them with nice positional awareness. He too is improving every game. 7.5

Van Persie: Wasn’t brought into the game much but when he was brought it produced a goal. An assist to his name as he needs more games to get back to his best. 6.5

Walcott: Failed to do anything when he had the ball. He is not looking confident and doesn’t know what to do with ball. No ratings for him. 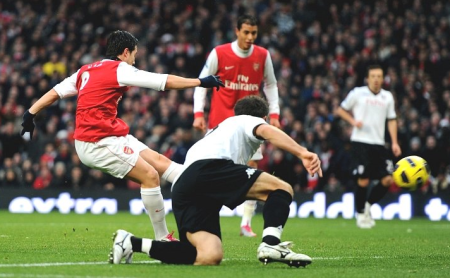 Today’s match hero was none other than Nasri as he scored too remarkable goals to send us top of the league. Wenger was full of praise for Nasri after the match as he said that he always knew Nasri had the talent. A lot of people questioned Wenger when he bought him but now Nasri is showing that he is exceptionally talented. Wenger was off the view that more is still to come from Nasri.

” I always was a strong believer in him.  Many people questioned me when I took him here but he is showing that he is an exceptional talent and I think there is more to come from him.”

On the two goals scored by Nasri, Wenger said that it required patience and Nasri did well on both occasions. It was a combination of intelligence and talent. He said that he was happy for him as he has added a lot of variation to his game. At the moment he is turning, making runs off the ball and also carrying the ball at his feet. Overall he is improving game by game and getting more efficient.

“It was a combination of touch, intelligence, special talent and calmness as well. He needed to be patient to finish on both occasions and he did that very well. I’m happy because he had a game that was, at the start, only based on coming to the ball. But now he has more variation in his game: turns, runs in behind without the ball, and as well coming to the ball and taking it to his feet. So his game is improving and he is, of course, more efficient.”

With 11 goals already to his name, which is more than the combined goals in the previous two seasons, Nasri is really turning it on this season.

Wenger was however not impressed when the ref allowed the match to be played on after Squillaci and Koscielny’s collision. Although, after looking at the replay he said that it was difficult for the ref as Koscielny didn’t fall down immediately.

“That is the approach that I made to the referee. But having seen it again, it is difficult for the referee because Koscielny tried to play on, he did not immediately fall down, and that is why the referee allowed the game to go on.”

On Koscielny’s injury he said that he hasn’t yet spoken to the doctor but he has a concussion.

“[Koscielny has] concussion. I don’t know what the medical people will say and how long he will not play. I haven’t spoken to the doctor yet.”

On the level of consistency shown by Arsenal and the title challenge, Wenger said that Arsenal is good enough to go on as all teams are struggling. It will be all down to consistency as there is a lot improvement from other teams. Despite having lost  games, Arsenal are top of the league and Wenger believes you have to be performing in every game to get the points.

“We are good enough to go on, that is for sure. As you see, every single team struggles to be consistent. At the moment, we are where we are despite having lost three games. Today, you could see again every game is a cup final. And if you’re not completely up for it, you don’t take the three points. We have the spirit, we have the quality but we face tough opponents. And it will be down, as I have said already many times here, to consistency.

The championship is far from over at the moment as Wenger said that the desire and spirit is there. The end will determine that was it enough.

“We are far from winning the championship yet. The only thing I can say: we have the desire and the spirit to fight for it. Will it be good enough? We’ll have the answer in May.”